Raising Autism and then some.

I married a man who’s never had children.

Interesting way to start a post, but I figured it was just the appetizer I needed to have you wanting to know where that statement was going.

After I joined the Navy, I learned that the letters actually stood for Never Again Volunteer Yourself.  Yet, volunteering is something I do as often as possible.

My son is almost 8, and I had literally written off having any more children.  I figured 37.5 hours of back labor was enough for me.

The thought of being pregnant again was mind-numbing, to say the least.  Actually, I would have preferred a frontal lobotomy while conscious over another pregnancy.

Now, I find myself looking at him, thinking, “One more won’t kill me.”

In 51 days, I’ll celebrate my 41st year on this wonderful planet… and it’ll more than likely be the year I give birth to my 2nd child.

What will be different the second time around?

Seriously, I see this potential pregnancy as my way of doing things a little differently.

I’m now aware of the various toxins in children’s items.

I’m now aware of the alternative schedule for vaccines should I choose to take that route with this child.

I’m now aware of the importance of natural healing remedies vs. conventional, and extremely toxic, pharmaceuticals and most OTCs.

I’m now aware of the importance of preserving this planet so other generations will have something to appreciate and, in turn, preserve.

I’m also well aware of all the risks associated with being an ol’ fart looking to conceive… again.

As a mother to one child with autism, I am no longer concerned about whether or not my DNA harbors the autism gene.

After all, autism was the best “thing” that ever happened to me.  It is because of autism that I am a more grounded, informed, patient and tolerant person.

Autism aside, I’m still trying to get over the fact that I actually want to go through pregnancy and labor… AGAIN!

Being crunchy means I will forgo the epidurals… the hospital.  Note:  I attempted natural way the first time but the back pain was too much for this wimp to bear.  Plus, the midwives, whom I thought were to make the natural experience enjoyable, were eventually cursed out unmercifully for not doing their jobs.

Being crunchy means I will, once again, take the natural path and stay on it regardless of my wimp-out factor and opt for a waterbirth, a doula, and a midwife who actually wants to her job by being there for me and the baby.

Being crunchy means I will take the prego yoga classes.

Maybe, I am losing what little brains I have left by wanting to give hub a child. 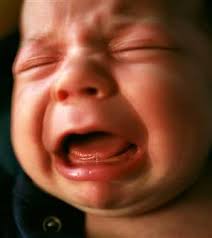